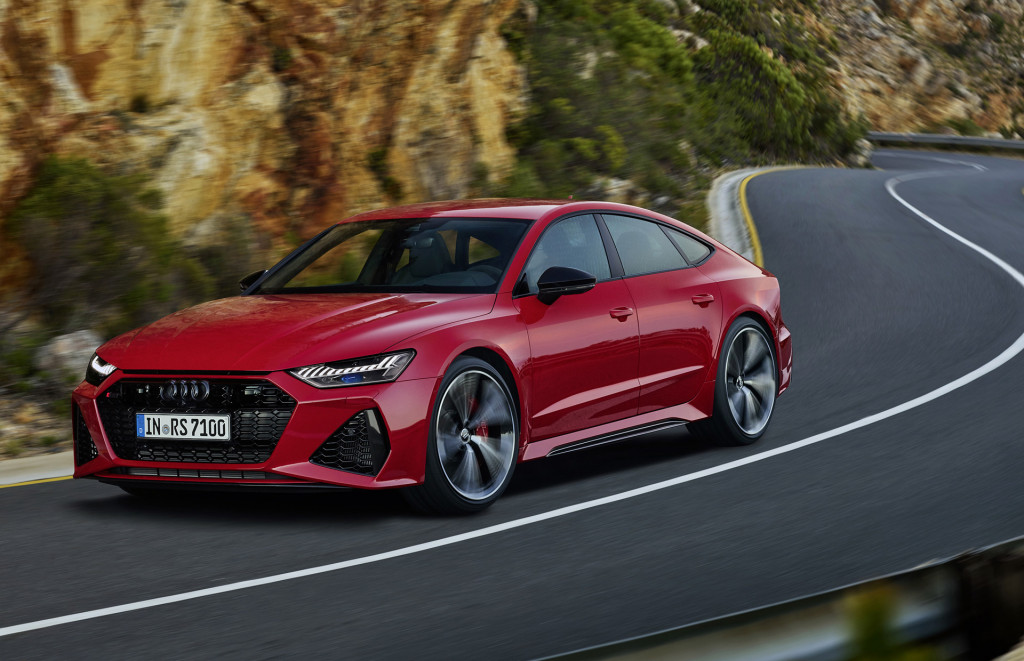 While the Frankfurt Motor Show in Germany might seem like a far cry from the States, many of the performance, luxury, and electric vehicles launched there will be heading over to the U.S. in the coming months. Here’s a look at what’s coming to America.

The 2020 RS 6 Avant mid-size sport wagon has a mild-hybrid, 4.0-liter twin-turbo V-8 that makes 592 horsepower and 590 pound-feet of torque mated to an 8-speed automatic transmission and all-wheel drive. The gorgeous performance wagon joins the Mercedes-AMG E63 S and Porsche Panamera Turbo S E-Hybrid Sport Turismo, as well as a slew of other sharp if not breathtaking wagons, on American shores in the near future at a price that should start in the six figures.

The RS 7 Sportback mirrors the lesser A7 models, only with wider fenders and more aggressive front and rear fascias. A subtle rear spoiler rises up at 75 mph over a pair of fat oval exhaust pipes. It’s expected in the U.S. in 2020.

Though the luxury coupe-like crossover was announced earlier this summer, the 2020 BMW X6 graced the Frankfurt show before coming to U.S. dealerships in November. For the 2020 model year, the X6 is offered in three grades. The rear-wheel-drive sDrive40i is the entry model and boasts a 3.0-liter turbo-6 rated at 335 hp and 330 lb-ft of torque. The all-wheel-drive xDrive40 features the same engine as the sDrive40i but drives more wheels.

For performance fans, there’s the M50i, which comes standard with all-wheel drive. The M Performance model packs the latest version of BMW’s 4.4-liter twin-turbo V-8, good for 523 hp and 553 lb-ft of torque.

Chinese automaker Byton unveiled its electric crossover SUV that will be the first production vehicle from the China-based automaker in the U.S. come 2021. It will be offered as a 270-hp rear-wheel-drive model with a 72-kwh battery pack, or a 400-hp dual-motor, all-wheel drive variant with a 95-kwh battery good for about 240 miles of range. Byton opted for a sleek, low-and-wide design that is more wagon-like than SUV-like, which should make it easy for contemporary crossover buyers to stomach even if it lacks the overly futuristic flair of Tesla’s Model X.

The convertible version of the V-12-powered 812 Superfast has a power retractable roof that deploys in just 14 seconds at speeds up to 20 mph. The engine is a 6.5-liter V-12 that makes 789 hp and 530 lb-ft paired to a 7-speed dual-clutch transmission, good enough to reach 60 mph in less than 3 seconds. It won’t blow your face off with the top down thanks to a small screen that pops up in the rear of the cabin to diffuse wind.

The Sián supercar is motivated by a 774-hp V-12 (the most powerful the company has built) paired with a 48-volt e-motor that throws in another 34 horsepower at speeds up to 81 mph. It hits 60 mph in under 2.8 seconds and has a blistering top speed of 220 mph.

After a long hiatus from the U.S., the 2020 Land Rover Defender off-road SUV is back. The Defender is as tall and boxy as its predecessor and comes in 90 and 110 body styles with two or four passenger doors, respectively. It has far more luxury conveniences than its predecessor. Though it may compete with Jeep Wrangler or Toyota 4Runner buyers, the Defender starts at $50,925 for a base turbo-4 Defender 110 but a top-trim Defender with an inline-6 can run up the tab to more than $81,000, before options, as only a Land Rover can. It is expected in dealer lots early in 2020.

The 2021 Mercedes-AMG GLB35 small crossover features a 302-hp, 2.0-litre turbo-4 with 8-speed dual-clutch transmission and all-wheel drive. It will reach dealerships in late 2020.

The luxury compact crossover gets a larger 13.5-kWh battery that should improve electric range from a paltry 9 miles in the outgoing model. Power comes from a 2.0-litre inline-4 and an electric motor-generator integrated with a 9-speed automatic transmission for 315 hp and an astounding 516 lb-ft of torque, or enough for 0-60 mph acceleration in about 5.6 seconds. Drive is to all four wheels as standard.

Launched the week before leading up to Frankfurt, the 2020 Porsche Taycan is the long-awaited all-electric sedan predicted to unseat the Tesla Model S electric performance sedan. Both Taycan Turbo and Taycan Turbo S (the Turbo has nothing to do with combustion engines in this case) are powered by electric motors on the front and rear axle that make 616 hp and 626 lb-ft of torque. With launch control activated, the Turbo can spin out 670 hp briefly, the Turbo S up to 750 hp (774 lb-ft of torque) for just a few seconds. Both cars reach a top speed of 161 mph, and the Turbo accelerates up to 60 mph in 3.0 seconds—the Turbo S does the same in 2.6 seconds.

Both Taycan models are powered by a 93-kWh lithium-ion battery that can be recharged up to 80 percent in less than 23 minutes on a fast-charger (270 kW). Porsche hasn’t yet said how far the Taycan will travel on a single charge, but we expect a range of about 240 miles. For more from the Frankfurt auto show, head to the dedicated hub on our sister site, Motor Authority.

Types of Bike Chain Lubricants and How they work!

How Artificial Intelligence is Evolving the World?