ThePRBuzz
Home Cricket How it feels to play for England in a Cricket World Cup... 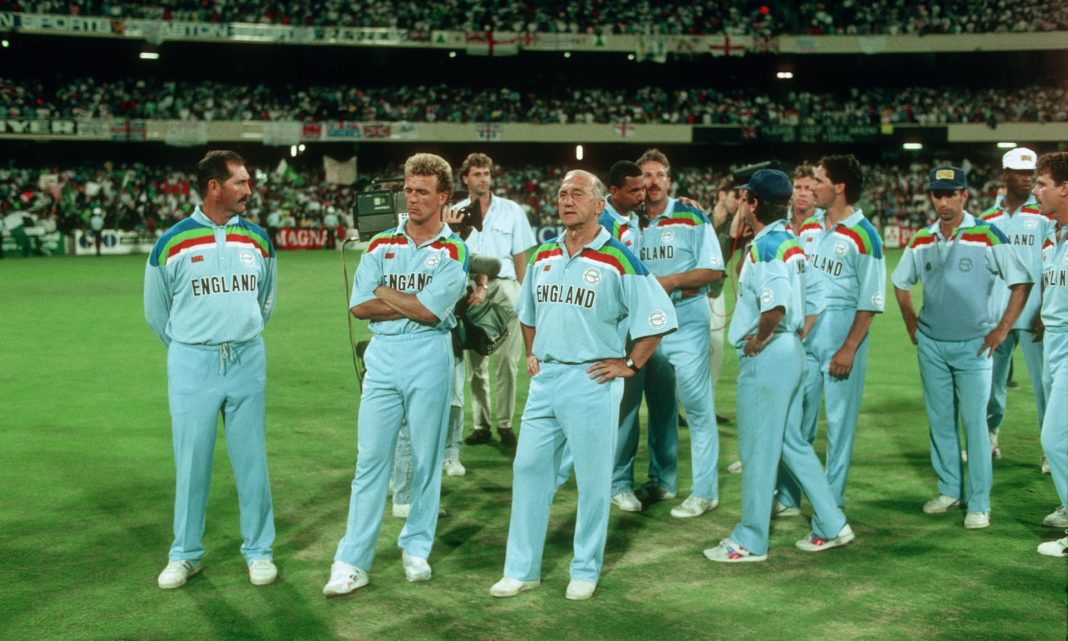 It is 27 years since England last contested a Cricket World Cup final. I know; I was there. Melbourne was the city, MCG the stadium and Pakistan the other team. They consigned us – or at least some of the team, such as captain Graham Gooch – to a third runners-up place in World Cups in 13 years.

They say it is the injustices that stay with you and to a certain degree they are right. In that final Pakistan made 249 batting first but it might have been a lot fewer had Javed Miandad been given out lbw, not once but twice, before he had reached double figures (he went on to make 58). On both occasions, I was the bowler. That World Cup saw a different new, white Kookaburra ball used at each end and not only that: a Kookaburra ball that swung, at least for conventional swingers like me.

That final, despite me needing to pass a late fitness test on an injured side, was no different. The hot, still air in the stadium, made denser but not turbulent by 90,000 spectators (most were Aussies and fairly neutral when confronted with whom to support between England and Pakistan), was perfect for my outswingers, which quickly brought me the wickets of Aamer Sohail and Ramiz Raja.

Ramiz was given out lbw by umpire Steve Bucknor, though whether this prejudiced the later case against Javed I have no idea. Whatever the reason, he dismissed both my appeals after Javed twice played around balls heading for the stumps, the general consensus being that at least one of them was striking middle about two-thirds of the way up. Certainly, Javed felt that one of the shouts was out, something he made plain to me after the match when I went to congratulate him and Imran Khan on Pakistan’s triumph. “Allah smiles on me today,” he said, tapping his left leg.

Did I feel terribly wronged by Bucknor’s intransigence? No, not really. Was I upset? At the time, yes (I queried Bucknor’s judgment in terms that would have brought me a big fine today). Yet any sense of inequity had passed by the time the trophy was lifted by Imran and we did a lap of honour to thank our loyal supporters for travelling with us the length and breadth of Australia, albeit without the concluding satisfaction of capturing the cup.

Let’s face it. Injustices have been perpetrated in the sport for centuries if not millennia. There is little you can do about them except to neutralise the grievance, reboot and get on with life. Of course, in this age of history by videotape, you can revisit such moments in times like these, in slow motion if necessary and play to the gallery.

It helps that England’s poor showing in World Cups since means there is a compliant audience to sing the 1992 chorus that “we was robbed” whenever we watch Bucknor’s boo-boo. But all that victimhood can be put to bed for good this summer should England win the trophy for the first time.

The disappointment of losing to Pakistan, a defeat that was possibly felt more keenly by Gooch and Ian “Beefy” Botham, who had both contested their first World Cup final in 1979, was crushing. There was more than the odd tear shed in the dressing room afterwards.

For two great players like them, as well as Allan Lamb, the sense that this last chance for glory had been missed must have cut deep, especially when it was snatched away by a team we had dismissed for a paltry 74 in the group stage only for rain to save them. But for a freakish day’s precipitation in drought-stricken Adelaide, Pakistan would not have reached the knockout stage.

Beefy, who knew the trip would be his swansong, warmed to his task slowly that winter. While the rest of the squad prepared for the World Cup by playing a three-match Test series and three one-day internationals against New Zealand, he trod the panto boards in Bournemouth, playing opposite Max Boyce in Jack and the Beanstalk.

When he did turn up about two-thirds of the way through that tour, he was rusty and overweight, though that did not prevent him from persuading Gooch to let him open the batting in the final one-day match against New Zealand – a role he had not performed since the 1986-87 Ashes tour. True to his bullish nature, he blasted 79 in 73 balls or, as one tabloid headline had it: “Bish, Bash, Bosh – Beefy.”

It’s funny the things that stay with you from nearly 30 years ago, but I remember Beefy arriving with a sack of Oakley sunglasses, at least two pairs each for those who wanted them. That largesse sparked the “sunglasses wars” with Robin Smith, who was sponsored by Bolle, their response being to provide him with a boxful of shades to dispense among the lads.

I accepted product from both men but wore neither during matches as I had always believed that sunglasses reduce visual acuity. I mean, if batsmen don’t wear them for batting – and most don’t – why wear them in the field? I was something of an evangelist about it and remember having a go at Smith after he had taken possession of Bolle’s swankiest model just before our group match against South Africa. “If you haven’t practised fielding in them, you shouldn’t wear them,” I chided. “You’d better not drop a catch off my bowling with them on or there will be hell to pay.” I think Smith left them in his bag and opted for a pair he had worn before.

The other “issue” I recall was that the ICC, who were bankrolling the tournament, had instructed teams that they must do their own laundry. Although we were staying in decent hotels, the ICC would not pick up the Extras bill, of which laundry, at least in rooms not occupied by Beefy, was always the biggest part.

I don’t recall us being on the verge of striking but the injustice and meanness of it rankled with Goochie, who called a team meeting where he informed our team manager, Bob Bennett, that “Joe Montana wouldn’t have to do his own laundry, so nor will we.” After a few days wrangling, and with smelly clothes piling up fast, the Test and County Cricket Board agreed to pay for the hotel for it.

If allowed to, little things like that can niggle away at team harmony, but we remained steadfast in our clean clothes. Obviously, it helps if everyone rubs along well together but it is not essential. Providing each player knows his role and fulfils it consistently well, the team project usually trundles along nicely. And most did.

England had a good mix of attitudes for that World Cup, especially in their approach to risk. At one end of the scale you had Beefy Botham and his sanguine, blood-and-thunder approach, a bit like the “play without fear” philosophy trotted out by Morgan and his team now. For all that, Beefy had only one game where he really fired, against the old foe Australia, where he got runs and wickets in an easy win at the SCG.

At the other end of the scale, were the spinners Richard Illingworth and Phil Tufnell who, typical of their ilk, would always expect the worst. In a playing squad of 14, eight born outside the UK, the remaining outlooks fell somewhere between that of the spinners and Beefy.

Although keen on a plan, Goochie acknowledged that players had to be prepared to reassess and improvise on their feet, something England sides have rarely been good at. And so it proved at that tournament. When teams allowed us to implement Plan A without reappraisal, we would beat them. But as soon as a side forced us to consider Plan B, such as New Zealand in Wellington and Pakistan in the final, we would dither and it would cost us.

That aside, most onlookers felt us to be the best side at the 1992 tournament. Yet many thought we were probably fortunate to win the semi-final against South Africa by dint of a bizarre rain rule that punished excellence with the ball.

I was injured for that game at the SCG, so didn’t play. But what I saw – and the apologists for South Africa never mention – was their cynical slowing down of the over rate, which saw them bowl just 45 of the 50 scheduled. Had they been forced to bowl those overs, and with our middle order going well at the time, they would have been chasing something around the 300 mark. A total that high back then would have been beyond them, though not as beyond them as the 22 runs off one ball they needed after the rain rule brought the game to a messy conclusion.

Even so, there was the slight feeling that we had peaked as a team. The ideas to open the batting with Beefy and the bowling with me, both hatched during our preamble in New Zealand, had freshened our approach. But now, for the final, it was more a question of putting in one good, professional performance against a side that, while vulnerable, had begun to bubble with confidence.

At one stage that approach looked very wise. Pakistan, who had won the toss and batted first, seemed as if they would struggle to reach 200, so slow was the recovery performed by Imran and Javed as they put on 139 for the third wicket. But a flurry of runs by Inzamam-ul-Haq and Wasim Akram left us needing 250 to win, a total that suddenly looked impossibly distant once Wasim knocked over Lamb and Chris Lewis in successive balls with 109 runs still needed.

To say that we were complacent is too simplistic. We probably assumed Pakistan would implode with the early pressure exerted by our bowling but they did not. Once they had regrouped and posted a good score, we needed to bat really well against an attack that could ask different questions of different batsmen – few of which, on the day, were answered.

Shamefully, given the amount of money lavished on England teams of all stripes, we’ve not been to another final until now. World Cups were never previously kind to the home side but that has changed with the last two being won by the tournament hosts. A third, now, would be dandy and demote England’s other near misses to the minor footnotes they deserve to be.

William Schantz: What is Life Insurance and Who Needs It The Most?

3 Common Mistakes to Avoid When Filing a Travel Insurance Claim