ThePRBuzz
Home Politics Japan says next British PM must not lead UK out of EU... 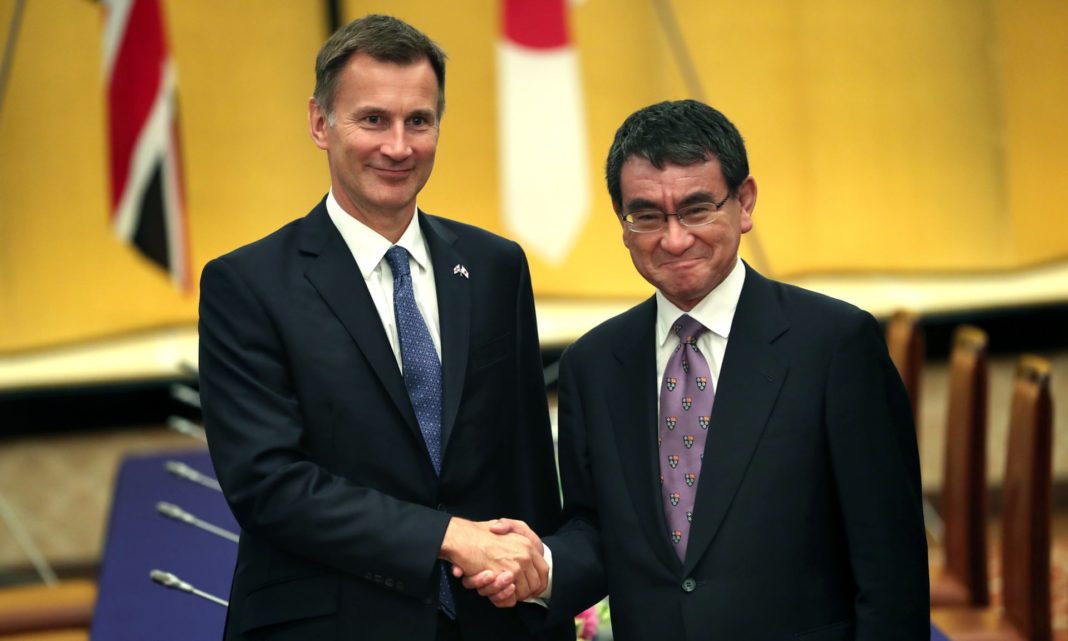 Japan’s foreign minister has pleaded with Boris Johnson and Jeremy Hunt not to lead the UK out of the EU without a deal when one of them becomes prime minister.

In an unusually blunt warning, Tarō Kōno suggested Japanese companies operating in the UK would relocate to other countries in Europe in the event of a no-deal Brexit.

“There are over 1,000 Japanese companies operating in the United Kingdom, so we are very concerned with this no-deal Brexit,” Kōno told BBC Radio 4’s Today programme on Thursday.

Both Johnson and Hunt have said they would be prepared to take the UK out of the EU without an agreement if they become prime minister. Kōno said he had asked both of them to avoid a no-deal Brexit.Advertisement

“Whenever we had a meeting that was one of the major issue[s], ‘please no no deal. No no-deal Brexit’,” he said. “Whatever they do is up to the UK government, but we just don’t want to have a negative impact on the foreign companies in the United Kingdom, including the Japanese.”

Kōno said he was particularly worried about the implications of a no-deal Brexit for Japanese carmakers in the UK.

Speaking as Theresa May is due to visit Japan for the G20 summit in Osaka on Friday and Saturday, he said: “There are a few Japanese auto manufacturers operating in the United Kingdom and some parts are coming from continental Europe, and right now they have very smooth operations.

“Their stock for each part is only for a few hours, but if there is [a] no-deal Brexit and if they have to go through actual custom[s] inspection, physically, those operations may not be able to continue. And many companies are worried about [the] implications, because they don’t know what’s going to happen.

“Some companies have already start[ed] moving their operation[s] to other place[s] in Europe, so we do not want disrupt [the] economic relationship with the UK. So we have been asking the UK government [to] let the Japanese companies know what they can expect and [that] things should happen smoothly without any disruption.”

Kōno said he knew both the former and the current foreign secretaries very well and revealed he had a signed copy of Johnson’s book about Winston Churchill and was impressed with Hunt’s ability to speak Japanese.

But he urged them to take care of Japan’s companies operating in the UK when one of them becomes prime minister, warning Japanese investment was in jeopardy.

Asked about the prospect of a bilateral free-trade agreement with the UK, Kōno said any negotiations would have to wait until after the UK leaves the EU. “You have to leave the EU first to be able to negotiate, so it would take some time. There [is] going to be some kind of gap between when the UK leaves the EU and when we can ratify [a] new trade deal.”

How Chemical Industry Is Important For Society? – Ziglerconstruct

How Test Based Learning Enhances the Performance of Students