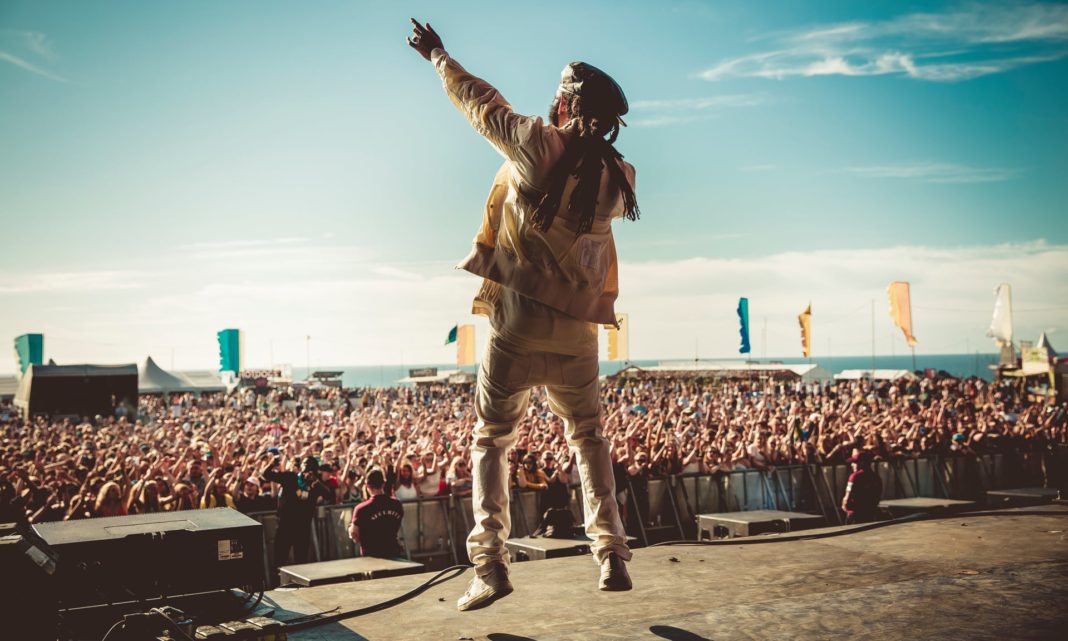 Arts, watersports, concerts, outdoor cinema, food festivals and bucketloads of family fun … Here’s our pick of events on or near the UK’s beaches this summer

Boardmasters (from £69 day ticket/£179 five-day camping ticket, 7-11 August) is a surfing and music festival in Newquay, Cornwall. Headliners at Watergate Bay are Wu-Tang Clan, Florence and the Machine and Foals, while pro-surfing, skating and BMX competitions take place on Fistral Beach. As well as surfing, festivalgoers can go paddleboarding, coasteering or kayaking, join daily beach yoga sessions or chill out in wood-fired hot tubs.

Wheels and Fins (from £36 day ticket/£103 weekend camping, 7-8 September) is another sporty festival right on the beach, at Joss Bay in Broadstairs, Kent, with surfing, paddleboarding and yoga, pro-skateboarders and a punk lineup topped by Slaves. The Beach Life festival (free entry, 13-14 July) in Eastbourne, East Sussex, has taster sessions of sailing, windsurfing and paddleboarding (£10 each), a giant paddleboard race, plus land-based sports such as skating, including an outdoor roller derby.

Festival of the Sky (free, 6-8 September) is an inventive new art event in Cleethorpes, Lincolnshire, taking place on the beach, the promenade and around town. The programme includes an immersive fire garden, a night-time hot air balloon show, kite festival, dance procession, street show with giant illuminated animals, an aerial performance from an “urban astronaut”, a Rajasthani brass band and circus, a cloud-watching storytelling event, and more.

Elsewhere, the Ventnor Fringe (from £3, 23-28 July) on the Isle of Wight is celebrating its 10th anniversary with a packed schedule of standup, live music, poetry and theatre; Fringe by the Sea (free and ticketed, 2-11 August) has 160 arty events around North Berwick on the East Lothian coast; and this year’s Arts by the Sea (mainly free, 27-29 September) festival in Bournemouth is themed around mental health.

Dreamland amusement park in Margate, Kent, has a Roller Coast festival (mainly free, 19 July to 1 September) throughout the summer holidays. Each week has a different theme, from superheroes to science. During Carnival Week, visitors can learn to samba, make a mask and sing along to The Greatest Showman. Rainbow Week celebrates Pride, Street Fest has BMX stunts and Channel 5’s Milkshake takes over for the final week. The Margate Caves are also reopening this summer after a 15-year closure.

In north Devon, the Sea Ilfracombe festival (free, 31 August-1 September) has traditional entertainment such a Punch & Judy, sandcastle competitions and treasure hunts, plus have-a-go sailing, paddleboarding and kayaking. The So festival (free, 30 August to 1 September) in Mablethorpe and Skegness, Lincolnshire, is a family-friendly outdoor arts event with a circus, acrobatics, comedy and street theatre.

The Shetland Nature festival (free and ticketed events, until 14 July) is a series of guided walks, talks and days out, including a whale watch, otter-spotting, boat trips to see seabirds, bog walks and rock pooling. The White Cliffs Walking festival (mainly free, 22-28 August) has coastal and clifftop walks in Sandwich, Deal, Dover and the surrounding Kent countryside. Nature walks include a Sandwich Bay route to the marshes and bird observatory, coming back along the sand dunes and river. The Marine Conservation Society is recruiting volunteers for it’s annual Great British Beach Clean (20-23 September). Thousands of people will clear Britain’s sands of plastic pollution and other waste.

Later in the summer, the Lymington Seafood festival (free entry, 10-11 August) in Hampshire has live soul, jazz and blues. The Moveable Feast (£3, 13 July, Porthmadog, 27 July, Llandudno, 17 August, Benllech and 24 August, Amlwch) is a travelling food festival in north-west Wales with local producers, brewers and distillers, plus craft stalls and live music. In the Isles of Scilly, intrepid diners can attend a barbecue in the middle of the sea: twice a year, the tides recede to reveal a sandbar between Tresco and Bryher, usually hidden under 20ft of water. This summer the Low Tide Event (free entry, 1 September) also features a gin bar, paella stand and rock’n’roll band.

Big screens on the sands are a growing trend. This year, the Luna Beach Cinema is back in Brighton with recent releases (Bohemian Rhapsody, Mamma Mia! Here We Go Again), classics (Grease, Top Gun) and family favourites, such as Moana, and The Little Mermaid (from £12.50 adult, £8 child, 31 July-18 August). Two beaches in St Ives, Cornwall, have open-air cinemas this summer.

Many have heard of Cowes Week (10-17 August) but there are lots of lesser-know regattas around the UK that make a great day out. As well as the yachting races, Salcombe Regatta in Devon features a sandcastle competition, an ice-cream-eating contest, a harbour swim and a firework display (mainly free, 3-10 August). The Gara Rock hotel is hosting the closing party (£30, 10 August). The Whitby Regatta in North Yorkshire has yachting, rowing and rafting races, plus a greasy pole competition, circus workshops, a dog show and stargazing parties (mainly free, 10-12 August). The Cardigan Bay Regatta has sailing races every day, plus children’s competitions on day one, swimming and rowing contests on day two, and crabbing and raft-building on day three (mainly free, 22-24 August).

Charlestown Harbour, the Unesco-listed Georgian harbour in Cornwall where Poldark is filmed, is holding its first Classic Sail festival this summer. Highlights include a “parade of sail” as tall ships enter the harbour, live music from the British folk band Mad Dog Mcrea and pirate-themed activities for children, plus the chance to visit one of Europe’s biggest shipwreck museums (prices vary, 30 August-1 September). The Great Yarmouth Maritime festival on South Quay has visiting ships to go aboard, three stages of folk musicians and sea shanty singers, street theatre and maritime skills demonstrations (mainly free, 7-8 September). Tarbert in Argyll and Bute holds 10 festivals a year, including a Traditional Boat festival, when vessels from Scotland and Ireland visit the harbour, including a two-masted gaff-rig cutter built in 1903 (mainly free, 20-21 July).

There’s no need to jet off to Croatia to find a music festival on the beach – there are plenty in the UK. Tunes on the Sands (day tickets from £44, weekend tickets from £97, camping £45pp, 12-14 July) is a new festival on Blackpool Sands in Devon, a sister festival to May’s Tunes in the Dunes on Perranporth beach in Cornwall. The inaugural Sands lineup includes Wet Wet Wet, the Hoosiers and KT Tunstall; there is a big top with circus activities, a silent disco, a gin terrace, a cocktail bar and street food.

The Victorious festival (from £35/£110/£130, 23-25 August) in Portsmouth is right next to the beach and has a seaside stage – headliners are Two Door Cinema Club, Rudimental and New Order. Sand Fest (£50, 14 July) on Sandbanks beach in Poole, Dorset, features top DJs and live acts including Chase & Status.

The Victorious festival (from £35/£110/£130, 23-25 August) in Portsmouth is right next to the beach and has a seaside stage – headliners are Two Door Cinema Club, Rudimental and New Order. Sand Fest (£50, 14 July) on Sandbanks beach in Poole, Dorset, features top DJs and live acts including Chase & Status.

Britain’s beaches are hosting exciting spectator sports over the summer. There are more than 70 beach volleyball events around the UK, and elite players can be seen in action in the Grand Slam Series (free, 13-14 July, Bridlington; 27-28 July, Weymouth and 17-18 August, Bournemouth). Sand Polo, the British Beach Polo Championships, is at Sandbanks in Poole. Tickets include entry to the afterparties on the beach (from £30 one day/£55 two, 12 and 13 July).

The British Beach Sports Champs take place on Branksome Chine beach, near Bournemouth. As well as beach handball, now in its seventh year, the 2019 event includes beach netball for the first time (£10, 2-4 August). This year’s Beach Rugby Wales tournament in Swansea Bay will feature 54 teams from all over the UK. Welsh, Irish and New Zealand national players have appeared in previous tournaments (free, 3 August).

5 Steps to Prepare for Your Upcoming Retirement: William Schantz

How Much Time It Really Takes To Receive Your CDL?

What is Breathwork Training Certification?