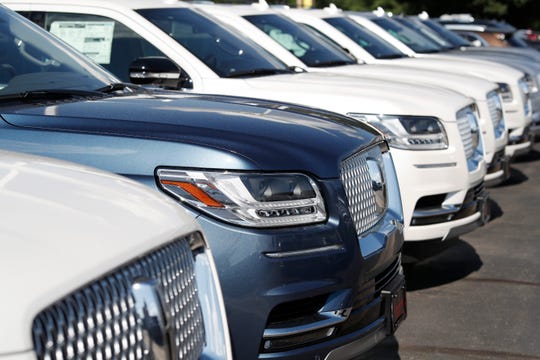 U.S. auto sales are down for the Detroit Three and at several foreign carmakers for the first nine months of the year as the economy slows. But experts still expect the industry to finish 2019 with near-record numbers.

Industry-wide sales fell 1.4% through September, due in part to a 12% decline last month, according to California-based analysis company Edmunds.

Still, most experts said automakers are moving vehicles at a roughly 17-million vehicle seasonally adjusted annual rate in spite of trade wars and a slowing economy.

General Motors Co. dealerships bucked the downward trend by selling 6.3% more vehicles during the July through September sales cycle than in the same period a year ago, even though a nationwide strike by the United Auto Workers shut down production for many of GM’s popular vehicles during the last two weeks of the sale period. Year-to-date, GM sales are down 0.8%.

Ford Motor Co.’s sales declined nearly 5% during the third quarter, and are down 3.5% year-to-date.

Fiat Chrysler Automobiles’ sales were flat last quarter, as its Ram trucks made up for declines at its other five brands. For the year, Fiat Chrysler sales are down 1%.

The Detroit Three are shaving sedans and compact cars from their lineups to make room for more-popular larger vehicles that have heftier profit margins. GM’s top seller, the Chevrolet Silverado pickup, sold 155,482 vehicles, up nearly 17% for the quarter year-over-year.

Ford’s third-quarter decline was driven largely by a continued decrease in car sales as the automaker trims sedans from the Ford brand. The Dearborn automaker’s car sales dropped 29.5% in the third quarter. Its SUV sales dropped 10.5% in that same time period as it prepares to introduce new Explorer and Escape sport utilities. Its truck sales grew 8.8% in the quarter and 6.9% in the year, due in large part to the Ranger midsize pickup.

Mark LaNeve, Ford vice president of U.S. marketing, sales and service, said Wednesday during a phone call that the industry “continues to be really quite solid despite a lot of issues flaring up.”

The job market is strong, he said, and when people feel confident, they buy vehicles. On a monthly basis, LaNeve said September had fewer days, and one less weekend than a year ago, and that contributed to sales declines for the industry. He added that Ford sales would have increased if not for planned sales declines in passenger cars.

Meantime, for a third consecutive quarter, Fiat Chrysler’s Ram pickup sales outpaced that of the Silverado, as the latest-generation Ram is sold alongside the less-expensive older model. Ram sold 161,635 pickups, a 14% increase for the quarter. Ford sold 214,176 F-Series trucks in that same period. Nearly 50,000 units separate the Ram and Silverado to date.

The difference between the profit-heavy Silverado and Ram “is only going to get worse with that strike,” Brauer noted. GM said Tuesday it had idled its assembly plant in Silao, Mexico, that builds the Chevrolet Cheyenne and Silverado and GMC Sierra trucks because of a parts shortage related to the walkout.

SUVs and trucks accounted for 72% of the industry-wide sales mix for the third quarter, up from 69% for the same period last year, while car sales fell to under 28%, according to a note Wednesday from Adam Jonas, head of global auto and shared mobility research at Morgan Stanley.

“We’re seeing (SUV and truck) growth taper off, but we’re not seeing demand soften at all,” said Jeremy Acevedo, senior manager of industry insights at auto information website Edmunds.com Inc. “The vehicles remain as popular, but they’re not growing at the same pace, the huge pace we’ve seen in the past few years.”

Sales incentives at the Detroit Three were up 6.8% year over year compared to 5.1% across the greater industry. Incentive volume was high in September, even without a Labor Day weekend included for the month’s figures, according to Cox Automotive.

Share prices of the carmakers fell on Wednesday on the sales news. GM stock closed the day down 4%, Ford was down 3.3% and Fiat Chrysler was off 1.9%. The broader market indexes were down just under 2%.

The Detroit Three recently transitioned to reporting sales figures each quarter. The rest of the industry still  reports monthly.

Honda sales were down 0.1% through the first nine months of the year. Toyota sales fell 2.5% in that time period. Volkswagen sales increased 4.5%.

Subaru of America said September sales fell 9.4%, breaking a years-long streak of monthly increases. Despite that, Subaru’s U.S. sales are up 4.4% for the year.

Do Perennials Come Back Every Year?

What to Consider When Buying Blinds and Shades?