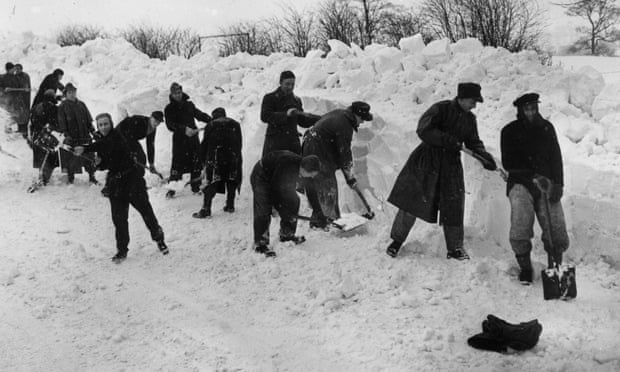 The forgotten history of what was once Britain’s biggest prisoner of war camp has been unearthed by archaeologists in the South Yorkshire countryside.

At its peak in the second world war, Lodge Moor camp near Sheffield held more than 11,000 mostly German captives.

Its extraordinary stories have been overlooked for more than 60 years as its moss-covered remains were shrouded in thick woodland.

Research by archaeology students shows the camp was used to hold the most fanatical of prisoners during the second world war, many of whom were from Germany, Italy and Ukraine.Advertisement

Analysing camp records, witness statements and surveying the prison’s weathered remains for the first time, the University of Sheffield students found the camp held more than 11,000 people at its peak in 1944.

But it was during the first world war that the prison, formally known as Prisoner of War Camp 17, held its most infamous inmate. Admiral Karl Dönitz was the captain of several German U-boats who was captured by Allied forces when his vessel, U-boat 68, was forced to surface in October 1918.

The Admiral spent about six weeks at the Sheffield camp, according to the research, before feigning mental illness to avoid being treated as a war criminal. Dönitz was released back to Germany, where he rose to become commander of Hitler’s U-boats and head of the German navy, before going on to succeed Hitler as president of the German Reich.

Lodge Moor was one of about 1,500 prisoner of war camps in Britain during the second world war but its significance, in terms of its huge size and type of prisoner, was not widely known.

Only partial remains exist of the site, now a popular dog-walking spot about five miles west of Sheffield on the edge of the Peak District.

Its history is occasionally discussed by local residents on internet forums but this research, by the University of Sheffield and the Sheffield Lakeland Landscape Partnership, is thought to be the first study of its kind of Lodge Moor.

At the beginning of the second world war, the camp was occupied mostly by Italian prisoners, who were put to work on local farms and appeared to enjoy good relations with their Yorkshire neighbours, who would share with them their limited supplies of tea.

However, quality of life in the camp deteriorated sharply with the sudden influx of German prisoners.

Rob Johnson, one of the archaeology students who surveyed the site, said: “The prisoners were fed food out of galvanised dustbins, had to stand outside in the mud, rain and cold for several hours a day during roll call, and since it was so overpopulated as a transit camp, they were squashed into tents or the barracks with little personal space.”

The study unearthed investigations into conditions at the camp by the International Committee for the Red Cross, which, in 1944, described it as “insufficient/uninhabitable” with half of the captives in huts and the other half in tents. The researchers found witness testimony suggesting there were more than 70 prisoners per barrack, more than double the official number of 30.

In common with other prisoner of war camps in Britain, Lodge Moor saw its share of drama. On 20 December 1944 a group of German prisoners managed to escape the site – but were captured in nearby Rotherham just 24 hours later.

Another escape plan ended in grisly fashion. One prisoner, Gerhardt Rettig, was chased around the Nissen huts by hundreds of inmates and beaten to a pulp after being suspected of tipping off Allied guards about a planned break-out in March 1945. Rettig later died in prison and his alleged killers were put on trial in London later that year. Two men, Armin Keuhne, 18, and Emil Schmittendorf, 31, were found guilty of his murder and executed by hanging at Pentonville prison in November 1945.

The students involved in the study said they hoped their findings would be used to preserve and restore the site and the surrounding woodland. Georgina Goodison, an archaeology student involved in the project, said: “It was a big eye opener for me, as I didn’t realise that Lodge Moor camp even exists. The woodland hides it well. It hides the secrets of all the thousands of men who were housed there merely decades ago.”

What exactly is reformer Pilates? Here’s everything you should be aware of the workout that is so popular.

5 Things Your Landscape Contractor Wanted You Had Known

What are the Essential Factors for Choosing the Right Maternity Bras for Yourself?