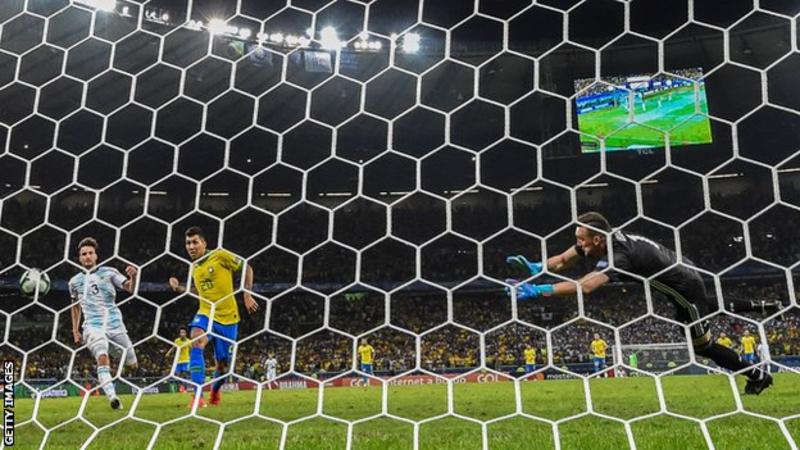 Brazil forwards Gabriel Jesus and Roberto Firmino both scored as they beat arch-rivals Argentina 2-0 in the Copa America semi-final.

Jesus opened the scoring after 19 minutes when he sidefooted in a low cross from Firmino.

Sergio Aguero and Lionel Messi both struck the woodwork for Argentina, who have not beaten Brazil in a major competitive fixture since 2005.

A Firmino tap-in secured the win to set up a final against Peru or Chile.

Brazil’s win came at the same Mineirao stadium in Belo Horizonte where they were thumped 7-1 by Germany in the 2014 World Cup semi-finals.

‘The officiating was crazy’

Argentina captain Lionel Messi felt a number of decisions went against his side as they failed to reach the final for only the second time in the last six Copas.

Messi was particularly aggrieved Argentina were not awarded a penalty by referee Roddy Zambrano before Brazil’s second goal.

He said: “Brazil were not better than us. They found the net early and the second goal came from a penalty they didn’t award.

“The officiating was crazy. There were clear penalties, on (Nicolas) Otamendi, on Kun (Sergio Aguero).

“He (the referee) was on their side. In every divided ball or dispute, he went their way.

“It’s not an excuse, but the truth is that, in this Copa, they kept on blowing for stupid things, for handballs, penalties.

“But they didn’t even go to VAR when there were clear plays that should have been looked at.”

Messi set to continue with Argentina side

Messi, who has won 29 trophies with Barcelona, has yet to win a major title with Argentina with his only success being a 2008 Olympics gold medal.

His next chance to change that will be when Argentina co-host the 2020 Copa America, with Colombia.

“Something new is on the horizon,” said the 32-year-old, who quit international football after his country’s defeat by Chile in the 2016 Copa America before returning for the 2018 World Cup.

“I hope we are respected and not criticised. They should let the team be and let them grow.

“The truth is I have got on very well with this group of players and if I have to help in some way I will. This is a great group which is growing and if I can join them I will.”

Brazil have lost just twice in 42 games under coach Tite, who praised Manchester City striker Jesus after the match.

“Gabriel impresses all the professionals that work with him because he never gives up,” said Tite.

“People tell him ‘you just have to put up with the pain and run,’ and that’s what I asked him to do.

“He has to refine his solutions and he has to evolve because he’s young, but if I ask him to shoot 50 times, he’ll do 51.

“This capacity of persistence and his quest for something is his trademark.”

Why Do You Need To Hire the Best Airplane Accident Attorney

Leesa Fazal: A Master in the Architectural Designing