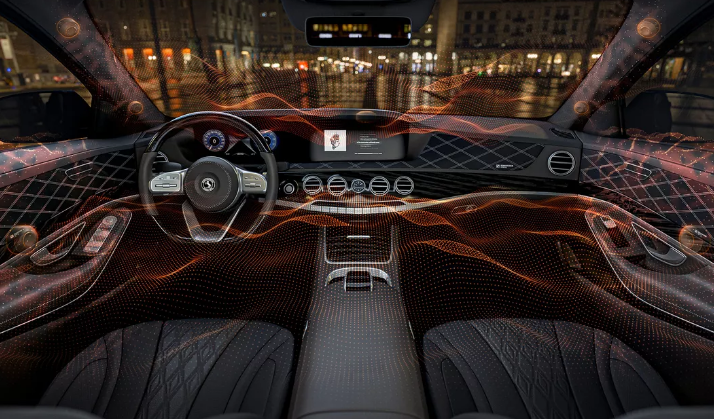 CES is slowly but surely turning into an auto show in its own right, with lots of new concept and production cars taking the stage in Las Vegas. But this show is still very much a place where we can get an in-depth look at specific technologies being developed for automotive applications, and at CES 2020, there were a number of important ones on display.

Here are our five favourite bits of brand-spankin’-new auto tech.

It’s amazing, with all the new tech being crammed into cars these days, some features still use tried-and-true, old-school designs. Take your sun visor for instance, which is basically the same now as it was almost a century ago. Automotive supplier Bosch is now looking to shake up this relatively ancient design.

Bosch’s Virtual Visor uses a transparent LCD screen and an in-car RGB camera which can track the sun shining on the driver’s face. The system then darkens sections of the Virtual Visor to prevent glares, with some 90% of the visor staying transparent at all times, for better visibility.

We recently had a chance to experience this tech firsthand before its CES debut, and it looks to be the real deal. Here’s hoping it can be integrated into new cars in the coming years.

Both Lamborghini and Rivian announced Amazon Alexa integration for their vehicles at CES 2020, but this goes one step beyond the sort of partnerships we’re used to. With both of these manufacturers, Alexa tech is being used in a new way: controlling vehicle functions.

Whether you’re in the Rivian R1T electric pickup truck or the Lamborghini Huracan sports car, you can use Alexa to do things like adjust the cabin temperature, play music or get directions to a point of interest. Of course, that’s in addition to all the usual Alexa features, like making calls and linking to your various connected smart home devices.

We have to imagine this sort of Alexa integration will quickly spread across the auto industry, especially as more companies work to bring better voice-recognition tech into their new cars.

There’s nothing like a good, comfy seat on a long road trip, and BMW thinks it’s about to launch the next best thing in this space.

Called the ZeroG Lounger, this new chair can recline either 40 or 60 degrees, but the seatbelt moves along with the passenger. The seat’s super safe, too. There’s a cocoon-style airbag that deploys in the event of a crash. When the seat is reclined, a screen drops down from the headliner and can show directional information, which combined with the position of the seat, can prevent motion sickness.

This isn’t just conceptual tech, either. BMW says this is scheduled to go into production in the next few years, with the first application likely being the X7 SUV.

In the future, you won’t need speakers to hear sound. Well, kind of. Automotive supplier, with the help of the audio experts at Sennheiser, have developed a new sound system that can emit sound from various surfaces inside the car.

Using Continental’s Ac2uated Sound system, special actuators vibrate interior components like the dashboard, A-pillars, door panels and even the car’s headliner to produce sound. The effect is an immense surround-sound experience, and Continental says that without conventional speakers onboard, this helps reduce a vehicle’s overall weight.

It’s unclear if any automakers are interested in this technology, and Continental hasn’t revealed any plans to put this conceptual system into production. Pretty cool, though, huh?

We’re pretty familiar with the Byton M-Byte at this point. The electric SUV officially debuted in production form at the Frankfurt Motor Show last year, and we took a quick spin in a prototype a few months before that. At CES 2020, Byton’s M-Byte greeted potential US customers for the first time and showed a new partnership to bring lots of entertainment options to the car’s massive, 48-inch screen.

ViacomCBS, Accuweather, Aiqudo and other companies will bring their content and services to the Byton M-Byte when it eventually goes on sale in 2021. (Editors’ note: Roadshow is owned by ViacomCBS.) You’ll be able to stream different TV shows from the ViacomCBS network, which sounds like a perfect way to kill the time while you’re waiting for the M-Byte to charge.

Hey, if cars are going to have 48-inch screens, we might as well put them to good use. Let’s just hope Byton also puts the necessary precautions in place to make sure people aren’t trying to watch their favorite TV show while out on the open road.

What are the uses of engine oils in India?

Which Is the Best Way to Start Creating a Digital Workplace?

How Can Alpha-Ketoglutarate Benefit You?

Top 4 Reasons You Should Hire a Private Investigator in NYC