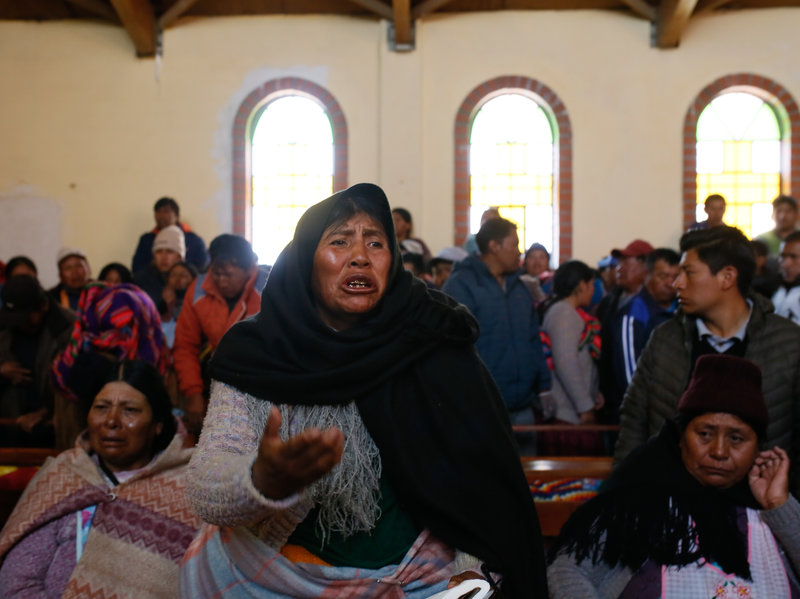 At least six people were killed in violence Tuesday as the military escorted fuel tankers from a gasoline plant in the high plateau city of El Alto. Supporters of Morales had blockaded the plant for five days, causing fuel and food shortages in La Paz, the administrative capital.

A reporter from The New York Times saw the bodies of five young men with gunshot wounds outside the plant, and witnesses say a military unit shot the men. Bolivia’s human rights ombudsman confirmed that six people were killed in the incident, bringing the death toll to 30 since last month’s disputed election and Morales’ ouster, according to Reuters.

Hundreds of mourners gathered at a Catholic church in El Alto on Wednesday, and family members at the service said the men who died had been walking to work when they were fired upon.

Bolivia’s interim defence minister, Fernando López, denied that the military had fired a single bullet outside the plant. He said protesters were attempting to blow up the plant with explosives, The Associated Press reports.

The violence was the latest clash between Morales’ supporters and a military controlled by his opponents, who now control the executive branch of the government.

Jeanine Áñez, the Senate vice president who declared herself interim president after Morales stepped down in what he called a coup, presented a bill on Wednesday calling for new elections.

“We have developed a basic bill. It can probably be corrected, agreed upon, enriched by all the sectors that are involved with the aim of pacifying the country and choosing our rulers,” she said in a statement, according to Reuters. “But there will be elections in the country; we guarantee it.”

But Áñez is struggling to appear credible, and the bill may fail before the country’s legislature, two-thirds of which is part of MAS, Morales’ Socialist party.

Some Bolivians believe Áñez bent the rules in proclaiming herself to be interim president. While she is supposed to be a neutral figure guiding the country toward new elections, she has cut ties with Venezuela and expelled hundreds of Cuban doctors.

Meanwhile, Morales is exerting influence from exile in Mexico City. He has been tweeting frequently, criticizing Áñez as well as opposition leaders Carlos Mesa and Luis Fernando Camacho.

“The dictatorship of Áñez, Camacho and Mesa has already caused 30 deaths and dozens of wounded with repression by the Police and the Armed Forces. I call on the [Inter-American Commission on Human Rights] and the UN to denounce and stop this massacre of indigenous brothers who ask for peace, democracy and respect for life on the streets,” Morales tweeted Wednesday.

“[T]his is a de facto government and not a transition,” he wrote the day before. “It is a government of treason to the Fatherland.”

Morales oversaw a period of growth and equality in his 14 years as Bolivia’s first indigenous president, and he had become a figurehead for indigenous people and Socialist causes.

Arturo Murillo, a senior figure in the interim government, is now accusing Morales of sedition, alleging that the former president directed his supporters to set up blockades, such as the one in El Alto, in defiance of authorities.

In an interview Tuesday with The Wall Street Journal, Morales said he would not run in the next election if he is allowed to come back to Bolivia to complete the last few months of his term.

But Morales’ return to the presidency is unlikely, says Eduardo Gamarra, an expert on Bolivia and Latin American politics at Florida International University.

Morales resigned amid protests and a loss of military backing after a report by 36 elections experts at the Organization of American States found evidence of clear manipulation of voting systems in the Oct. 20 vote that showed Morales winning a fourth term in office.

Under Bolivian law, Gamarra says, Morales should be prosecuted for election fraud and his party penalized. “But if that’s done, Bolivia’s not going to be stable for years, because the MAS is a big movement, and it’s a very personalized movement. It’s Evo Morales.”

Morales’ high-ranking deputies resigned when he did, leaving a power vacuum at the top of the country’s most popular political party.

“He never ever thought about succession,” says Gamarra. “There is nobody to succeed him. There is not a third, fourth or fifth person to lead the MAS.”

It may take some creativity to get through the current political crisis, Gamarra says, such as the government allowing MAS to run in the next elections, though not Morales or his vice-president.

Whatever happens, needs to happen quickly. Bolivia must call elections and hold them by Jan. 22, 2020. On that day, the mandate of both Congress and the interim president expire.

5 Tips for Choosing the Right Furniture for Your Home