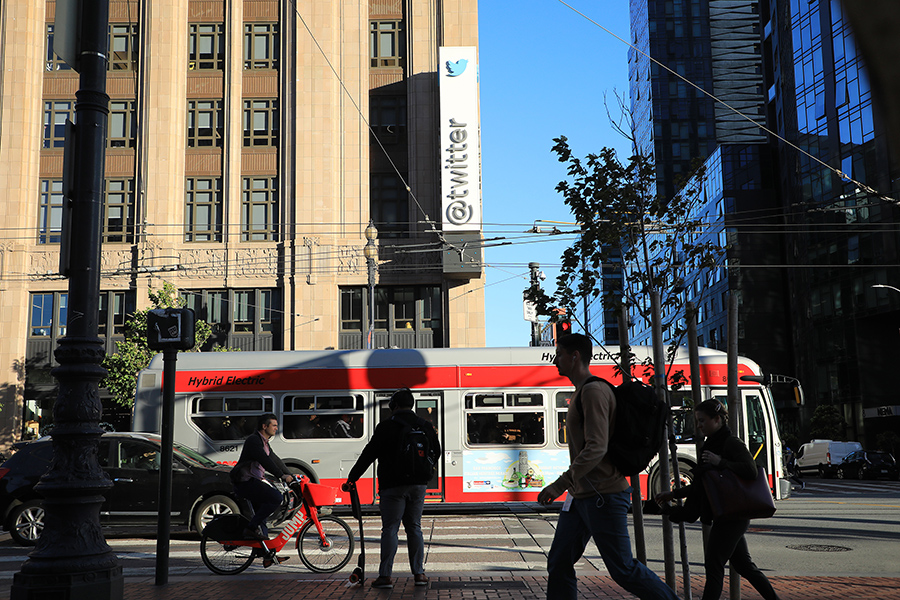 Twitter said ads that discuss elections, candidates, parties and other overtly political content would be prohibited, and those that reference causes would be restricted

Twitter’s headquarters in San Francisco, Sept. 19, 2019. Twitter has said it will ban all political ads. But what is or isn’t a political message is often in the eye of the beholder. (Jim Wilson/The New York Times)

SAN FRANCISCO — The Alzheimer’s Association, a health care advocacy group, recently spent more than $200,000 on an ad campaign on Twitter. The campaign had a singular purpose: To persuade people to ask Congress for larger investments in medical research for the disease.

Now the nonprofit is worried about whether those messages will still fly. That’s because Twitter announced last month that it would soon forbid all political ads to run on its platform — and depending on whom you ask, pushing lawmakers for money for medical research could be seen as a political cause.

The Alzheimer’s Association was so concerned that it contacted Twitter this month to express misgivings about the political ads ban. “We’re not really sure how it’s going to impact us,” said Mike Lynch, a spokesman for the group. “A lot of what we do is issue advertising, so it really depends on how they define political advertising.”

The Alzheimer’s Association is one of many nonprofits and organizations that have put pressure on Twitter over its prohibition of political ads, which is set to start on Nov. 22. The problem is that while campaign ads from candidates are clearly political, other messages that deal with hot-button issues such as abortion, school choice and climate change may or may not cross that line.

That has set off a scramble within Twitter to define what constitutes a political ad. Twitter’s advertising executives have held meetings in Washington with public relations and free speech groups to debate the situation. And the company has fended off public criticism about the ban, including from Sen. Elizabeth Warren, D-Mass., who is running for president. Last week, Warren said Twitter’s new ad policy would prevent climate advocacy groups from holding corporations accountable.

On Friday, after weeks of discussions, Twitter rolled out a formal definition of what it considers to be a political ad. Under the official policy, Twitter said ads that discuss elections, candidates, parties and other overtly political content would be prohibited. For ads that reference causes generally and that are placed by organizations and not politicians or political candidates, Twitter said it would place restrictions on them but not ban them outright.

“It’s a big change for us as a company but one we believe is going to make our service, and political advertising in the world, better,” Vijaya Gadde, who leads Twitter’s legal, policy, trust and safety divisions, said in a call Friday to introduce the policy.

Twitter’s unveiling of its political ads policy did little to mollify its critics, such as conservatives who have said the barring of such ads is an attempt to suppress right-wing voices.

“Whatever they come up with, we fully expect Twitter to continue to censor, block, or to incur ‘bugs’ that will unfairly silence President Trump and conservatives,” said Tim Murtaugh, the Trump campaign’s communications director.

Some super PACs and political groups said Twitter’s decision disrupted the political advertising strategy and budget they had already mapped out for the 2020 election.

“Changing the rules halfway through is really dangerous,” said Danielle Butterfield, the director of paid media for Priorities USA, one of the largest Democratic super PACs. “A lot of organizations are going to have to look back at their strategy and figure out how to adjust, especially in the middle of the cycle.”

She said her group had used ads on Twitter to flag stories about the economy under the Trump administration to local reporters in swing states, a key part of their in-state strategy.

Twitter finds itself in a delicate situation because its chief executive, Jack Dorsey, decided last month that the social media service would no longer host political ads. In a series of tweets Oct. 30, Dorsey said political ads presented challenges to civic discourse and added that he believed the reach of political messages “should be earned, not bought.”

His declaration contrasted with that of Twitter’s rival, Facebook. Mark Zuckerberg, Facebook’s chief executive, said last month that he planned to allow political ads on the social network — even if they are inaccurate or contain lies — because such ads are newsworthy and should remain for free speech reasons. Warren and others have pilloried Zuckerberg for his stance, saying he is running a “disinformation-for-profit machine.”

Dorsey, though, was immediately praised by politicians — including Rep. Alexandria Ocasio-Cortez, D-N.Y. — for taking a stand against political ads.

At the time, Dorsey defined political ads as those sponsored by candidates or that discussed political issues. He said some ads, such as those promoting voter registration, would be permitted as exceptions. Dorsey, who has since been traveling in Africa, was unavailable for comment Friday.

His pronouncements quickly kicked up a ruckus among nonprofits, lobbyists and others, who said they feared they would no longer be able to run issue-based ads on Twitter because it was unclear if their messages would be considered political.

“The policy would tilt the playing field,” said Eric Pooley, a spokesman for the Environmental Defense Fund, an environmental advocacy group. “Nonprofit organizations need to be able to communicate to the public. That’s what we do.”

The American Federation for Children, a school choice advocacy group, said Dorsey’s announcement had created uncertainties and that it was being unfairly swept up in Twitter’s efforts to clean up its platform. Affiliates of Planned Parenthood added that they already struggled to get ads approved on social media and worried about a ban.

“Digital advertisement is a cost-effective way for small nonprofits to reach their audience. The question becomes, where do we turn next?” said Emma Corbett, the communications director of Planned Parenthood Empire State Acts, which represents Planned Parenthood in New York state.

Twitter said it held discussions about the policy with the American Civil Liberties Union and the Public Affairs Council, a nonpartisan organization that advises companies on their lobbying and digital advocacy efforts, last week.

Nick DeSarno, the director of digital and policy communications at the Public Affairs Council, said Twitter was trying to split the difference between limiting politicians from placing ads while allowing advocacy organizations to continue raising awareness about political topics.

“While Twitter’s potential new issues ads policy is more permissive than a total ban, it’s still going to be a challenge for groups who are trying to drive political or legislative change using the platform,” he said.

“We very much believe that cause-based advertising has value, and can help drive public conversation around important topics,” said Del Harvey, the vice president of trust and safety at Twitter. “But we still don’t think it should be used with the sort of primary goal of driving political or judicial or legislative or regulatory outcomes.”

Top 5 Advantages Of Choosing A Career As A Photographer.

Why do People Use iOS VPN?

How Dental Fillings Can Give New Life To Your Teeth!